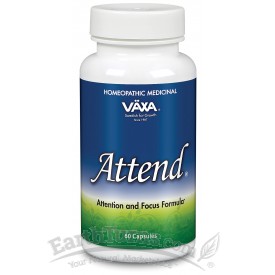 Attend is the best alternative for children or adults with ADD or ADHD.

Although Attention Deficit starts in the brain, it really involves the entire sensorium (vision, smell, touch, hearing, etc.) as well as the inner world of cognition and emotion. When deprived of the required number of neural connections needed to process the “traffic” smoothly, competition between various stimulus results. Overly competitive stimulation from multiple external and internal sources (too much visual stimulation, too much sound stimulation, too many internal feelings and emotions, etc.) can cause undue frustration, irritation, aggression and anxiety. When the limited neural network is overly taxed in this regard, it becomes unable to “tune in” or focus on some stimulation, while “tuning out,” or “turning down” (attenuating) other stimulation.

This lack of ability to focus on some particular stimulus while attenuating others, creates undue “noise” in the perceptual systems within the brain. For the Attention Deficit individual, this perceptual “neural-noise” is so overly noxious and continuous that it appears to be competitively assaultive, crippling any attempt to concentrate on one stimulus while attenuating others. Feelings of helplessness and anxiety are often overwhelming, forcing an Attention Deficit individual to look for ways in which to survive the assaultive nature of their world.

A number of strategies are possible, but two are generally the most common and most easily documented. The first is that of an ADHD individual. Children and adults with ADHD are hypothesized to have ample supplies of Acetylcholine and clear, lipofuscin-free, unobstructed Cholinergic pathways, allowing them to actively compete and overwhelm the intrusive messages. Thus, ADHD individuals attempt to operate at a “noisier” level (becoming intensely hyperactive), trying to “shout-down” the crowded array of competing stimulation within their brain.

ADDs and LDs are hypothesized to have low Acetylcholine levels and adverse lipofuscin populations within the Cholinergic neural pathways, making a competitive response more difficult and trying. For both an ADD and LD individual, it becomes so “noisy” that it becomes necessary to shut down all processing of the senses altogether, avoiding and deflecting all stimulation. The incessant cacophony of “neural-noises” produces a powerfully competitive “numbing,” almost hypnotic agent, and ADHD individuals simply “give up” to the competitively powerful undifferentiated “white-neural-noise” being generated by their sensorium because the neural-thresholds of the sensorium have over-fired and can no longer be sustained. Thus, unlike other children, the ADD and LD individual simply “shut-down” and “tune-out,” producing high Theta and/or Alpha brain waves (see brain maps below).